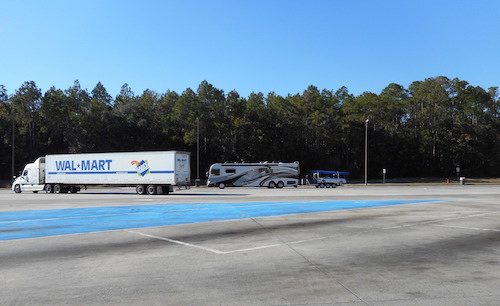 Sitting on the toilet in my RV in the Walmart parking lot in Anchorage, Alaska, I watched out the windows as shoppers arrived at their cars with carts full of goodies that they stashed in backseats and trunks.

Up until then, I hadn’t really thought about the fact that I was pooping in the middle of a public parking lot.  Clearly, these people had no idea that they were being observed by someone answering the call of nature, for they certainly would have been quite uncomfortable had they known the true nature of their situation.

You would think that for all their massive size, RV’s would stand out like a sore thumb to people.  After all, when you have total overall length of 49’ including your car and tow dolly, you can’t just pull straight through a couple of spaces.  Instead, to park such a monstrosity, you have to park cross-ways across about 7 spaces, being certain to do so in such a way that prohibits (or at least discourages) others from parking immediately fore or aft of your rig because you need that space to get out.  That being said, there are people who will do just exactly that, and that is just one of the many reasons that I believe that RV’s possess highly sophisticated cloaking technology.

As I traveled over many, many months through the Lower 48, Canada, and Alaska, I had this notion confirmed to me almost daily.

One of the first instances was at a rest stop where I had decided to spend the night just outside of Louisville, Kentucky.  It was my second night on the road as a full-time RV’er, and not wanting to pay to stay in an RV park or wander too far off the Interstate to find somewhere to stay the night, I opted for a rest stop.

I wasn’t sure of what to expect because people are always talking about how dangerous they are at night.  After walking the dogs late in the afternoon, I arrived back at my RV, Eddie, to see a trucker with a flatbed style 18 wheeler who was rearranging some apparently very heavy bags of something.  When I got close enough to read the bags, I realized that he was carrying sandblasting gravel – the kind I used to buy in bulk to sell as aquarium gravel.  The bags weighed 100 lbs. each.  I knew because I had lifted more of them over the last decade than I cared to remember.  Our store bought them from a local tool rental place, and because of the weight, I could only buy 6 at a time to carry back in my Prius.

I chatted with the guy, who was just a little more than pissed off at the guys who had originally loaded his rig.  He said that he had recently had back surgery and was not supposed to be lifting at all.  To boot, his boss was calling his cell phone and wanting to know why he was late.  This wasn’t the first stop like this he had had to make by what I gathered from his phone conversation.  Although he was in a rather sour mood, he was friendly and obviously a normal, everyday person, and that put me quite at ease in this location.  After he got his load readjusted, he headed off toward his destination.

Several other truckers came through as I was cooking dinner.  Nothing seemed out of the ordinary.  Feeling safe, I walked the dogs just before sunset and locked us in for the night.  I had my daytime shades drawn, which meant that I could see out, but no one else could see in.  After a few minutes, another truck pulled up alongside me and released its airbrakes, sending the dogs into orbit.  They had not yet become accustomed to this sound.

The trucker got out to stretch his legs like they all do, and I didn’t think much about it – until I realized that he was relieving himself in full view from my dining room table – and only a couple of feet away from my rig.  Surely he must realize that there is someone inside the RV, I thought to myself.  I guess that he didn’t expect that someone to be a woman.  Maybe he didn’t care.  How terribly strange, I thought.

It would so happen that I saw almost a penis a day whenever I was parked by the side of the road, which was most of the time.  It tuns out that whether I had my blinds drawn or not, men did not seem to care – because they didn’t notice me.  I realized about half-way through the trip that had I have been thinking like a business woman, a dash-cam and an internet connection to voyeur fetish websites could have provided me a pretty reliable income for the duration of my trip.  Not that I would actually do such a thing, but I’d be lying if I said it didn’t cross my mind.

Over the course of the trip, I witnessed people having sex in cars next to me, people getting into altercations, and every other thing under the sun you could imagine.  Once, I overheard one side of a conversation of a woman who was clearly speaking to the lover with whom she was having an affair – and the conversation was anything but PG-13 in nature.

Perhaps RV’s make the ultimate spy-mobiles and I’m destined to become one of the highest-paid private detectives in history for my incredible ability to conceal myself in broad daylight.

My Trip to the Top of the World – Almost Living in a Wind Tunnel: Winter on the Washington Coast

Why I Didn’t Reach Climax