Traveling for extended periods of time is totally possible, even if you aren’t independently wealthy. You just have to spot odd jobs and be willing to try.

After college I went to Germany with the intention of going to grad school.  I took a number of challenging language exams, passed, and was subsequently admitted to the University of Göttingen.  In short, it didn’t work out – not because I couldn’t do the work, but because I didn’t care for the program itself.  I had chosen cultural anthropology, but it was being taught from what I perceived as an outdated perspective.

So, I decided to bide my time by working to earn a little money until I figured out what I wanted to do next.  I went to the student work center where you could go and find odd jobs that didn’t pay very much, but got you usually enough money for a few groceries and beer at the end of the week. 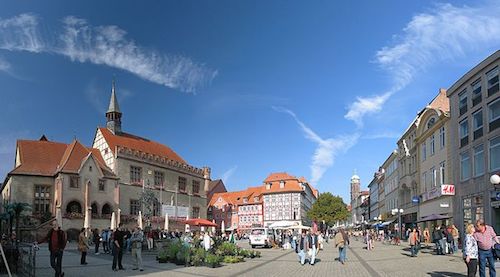 Most of the jobs were for cleaning duties and the like and sure enough that is the type of job I was given.  Not exactly my dream job of working abroad, but it was work.  It was for some sort of wine shop and my job was to clean the public restrooms and some other random areas of their property.  How hard could cleaning be?  Not exactly a job that I would want on my resume, but it would do.  The lady in charge was very strict and not very personable.  I wouldn’t have to deal with her much, so I took the job.

I did not last very long, however, as after about a week I made a goof while cleaning.  I squeezed out some floor cleaner onto the concrete floor in the men and women’s bathrooms and when I reached to get the mop, I realized that I had forgotten to retrieve it.  I ran down to get it, and by the time that I had returned to mop up the cleaner, it had etched the concrete floor.  Where I had squirted the cleaner, there was a tan colored squiggle line in the midst of a dark grey floor.

Naturally, I had done this in both bathrooms, so the problem was twice as bad.  I tried to apply the cleaner evenly across the floor and let it sit for a while, hoping against hope that it would lighten the entire floor.  Of course, this did not happen, so I was out of options.  Maybe they wouldn’t see it, I hoped.

I apologize in advance for the stereotyping that is about to follow, but if there’s one thing about German women that can be stereotyped, it’s their fastidiousness and attention to detail when keeping a clean house.  Of course, the lady saw it and I was summarily dismissed from my position.

Feeling like a complete imbecile, I returned to the student work place to find another job.  I figured that they would have heard that I had destroyed someone’s floor and would not give me another job, but it seemed that they hadn’t – either that, or I was being punished.  I was given the names of two male roommates who couldn’t seem to keep any housekeepers.  Apparently, their place was such a disaster that the students that were sent there usually quit.  I wondered what I was in for, but I took it.

Sure enough, when I arrived it looked like a bomb had gone off in their place.  They were very nice and we got along well.  I was happy to have landed the new position.  I don’t think that I ever seemed to make much of a dent in their mess, but they were happy with what I accomplished.

Ever Thought About Working in Construction?

After working with them for about a month, one of them approached me with a very strange offer.  He asked me if I had ever done any construction work before.  Apparently, the two of them were in the construction business.  I told him that I had not, but said that I’d be interested in the work if someone was willing to teach me.

The next day, I showed up at their job site – a 400 year old pharmacy building that was undergoing renovation on all of the floors above the ground floor.

I can’t remember what the exact wage was that I was offered, but it was an astounding amount of money.  The building owner was trying to keep down costs, and had hired out to these guys to do black market work, which meant that all workers were hired outside of tax laws and minimum wage standards, which was about 4 times the wage we were getting because it was skilled labor.  Most of us were unskilled, however, and were happy for the employment.  We were a mix of students and traveling people who were looking for temporary work.

In the following months, I learned basic carpentry, some old building techniques that were used in Germany hundreds of years ago (the exterior walls had to be redone in the original style), how to mix concrete and lay a concrete floor, framing, and how to remove paint with a heat gun on windows so old that the glass had run.  I don’t even want to think about the fumes I inhaled.  My liver is probably irreparably damaged and I doubt I’ll ever manage to detox all of that toxic waste.

The guys I worked with were awesome.  I was the only female, with the exception of one lady who was with us briefly.  We worked like slaves all day, then went for “a beer” or two – read: a LOT of beer – and then, often did other odd-ball jobs at night like laying concrete floors.  That work was particularly hard, because in Germany there are laws about using power tools past a certain hour of the day, so all of that concrete was mixed by hand and carried in buckets.  It was a good time, though.

With the money I made that summer, I managed to fund a year-long trip to Africa, so it was worth it.  The skills I learned in construction have served me well.  I enjoy building things and have had the opportunity to  put those skills to good use a number of times since.

The moral of the story?  If you are offered black market work in Germany doing construction, take it – just invest in a good respirator – oh, and don’t get caught.  It is rather frowned upon (read: illegal).  There are, naturally other jobs overseas.  You might want to look into them as well.

Traveling Europe on the Cheap:  Making the Most of Your Eurail Pass Inside-Out Prison in South Africa