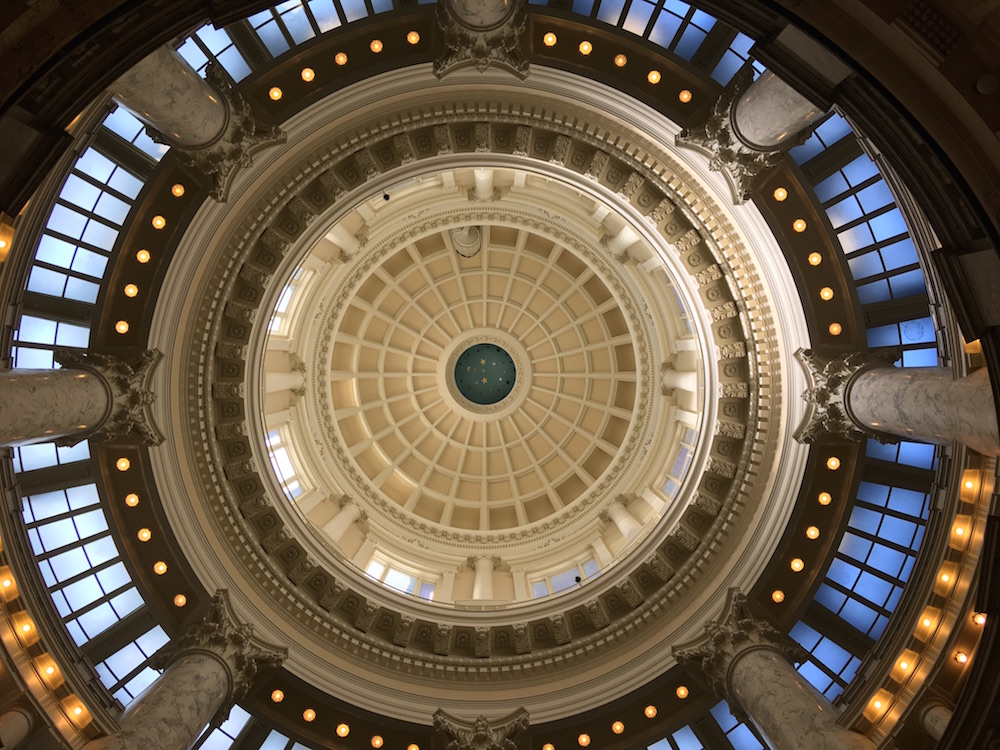 If you step into the rotunda of the Idaho State Capitol and look up without uttering a gasp, there is a good chance you are wearing a blindfold.  A first impression brings to mind the idea that the masterful use of light and space in this building is, at the very least, worthy of the ancient masters of architecture.  Upon closer inspection, it seems like the ancient masters may have had a thing or two yet to learn.

John E. Tourtellotte, a transplant to the booming Boise area in 1890, served as the the visionary architect.  It was his extraordinary concept that came to life in the form of the Idaho State Capitol Building.  His business partner, German immigrant Charles Hummel, was equally as important in making this dream a reality.

Charles was more of a “nuts and bolts” kind of guy whose penchant for precision served as an excellent counterbalance to Tourtellotte.  As Tourtellotte would come up with lofty ideas of how to manipulate space and light, Hummel with his engineering and classical architecture background, would ensure that the structure would be sound and enduring.

The Capitol Building is a brilliant and unique mesh of classical architectural styles that reflect the ornate and deliberate approaches of its two architects.  Where this is perhaps most clear is in the various columns throughout the building.  Stately Ionic and Doric style columns lend a sense of simplicity, directness, and purposefulness (characteristic of Hummel), while the highly-ornate Corinthian columns seem to imply elegance, sophistication, and inspiration (characteristic of Tourtellotte).  These radically different styles might seem unlikely bedfellows, but they work together seamlessly in this structure.

The House chamber dome. Another one that is quite similar is in the Senate chambers.

In 1905, fifteen years after Idaho became a state, a two-phase construction project began that was not completed until 1921.  The first phase of construction, which lasted from 1905-1912, produced the central section and dome.  The second phase from 1912-1921 created the wings to the east and west of the central section.  Two notable landmarks, the Central School and the Territorial Capitol Building which lay on either side of the central structure, had to be demolished in order for Phase II to begin.

Tourtellotte utilized stone as the primary construction material for the building because of its enduring, steadfast properties.  The Capitol Building represented to him the unwavering essence of the Idahoan people, many of whom were pioneers and miners – extremely strong-willed and resolute individuals.  Although granite was the preferred exterior material of the builder, Herbert Edward Quigley, a nearby high-quality sandstone quarry was ultimately chosen to supply the exterior stone.

Four remarkably different, yet complimentary types of marble from quarries around the world were used in the original construction of the internal portion of the Capitol Building:  gray marble with pattern was brought from Alaska; green-patterned marble was sourced from Vermont; a quarry in the State of Georgia was the source of the red marble; and black marble was brought over from Italy.

In today’s world of global commerce, sourcing materials from such distant locales is commonplace.  However, back in the days when communication was far less efficient and transportation of goods was much slower, obtaining large quantities of specialized materials was no easy task.  Anyone who has every had exposure to a construction project can testify that materials often arrive damaged, in an insufficient quantity, or completely wrong.  Imagine what it would have taken to correct such problems at the turn of the 20th century!

Although the columns surrounding the rotunda appear to be solid marble, they are actually scagliola.  Scagliola is a faux plaster style finish comprised of marble dust, glue, gypsum, and granite.  It is applied as a coating to an underlying structure and then dyed in such a way to make it appear to be marble.  Scagliola is a 16th century technique that became quite popular because it solved the problems of both cost and weight associated with solid marble columns.  Although it is not true marble, to the untrained eye it is convincing enough that its authenticity would not be second-guessed.

Light is what makes this building so inviting – irresistible, even. When you pass through its doors, you literally are compelled by the sight before you to continue into the rotunda – much like a moth would be to a flame.

Upper Floors and Dome in the Rotunda

The effect that the light has inside the space is completely unexpected after having glimpsed its exterior.  Its outward appearance resembles the United States Capitol Building just like many other capitol buildings throughout the country.  Most of those buildings remind one of caves when entered, because stone walls completely block out natural light and there is a cold, closed-off feeling about them.

That is exactly what Tourtellotte set out to avoid.  In reference to the Capitol, he commented that it “is not a cave with ornamental colonnades on the interior standing in superstitious darkness and gloom; neither is it a decorative shell enclosing a gloomy unornamented interior, damp cold and uninviting…The interior is flooded with light during the day and at night is ablaze with brilliancy without shadow or dark nooks.”

Indeed, the Idaho State Capitol Building is anything but cave-like.  It is like a gallery where natural light is the artwork being displayed.  Tourtellotte accomplished this remarkable task by using a series of light shafts, open spaces that would cast few shadows, and extremely white walls to draw in and retain the light.

Tourtellotte not only utilized light literally to illuminate the space, but also metaphorically.  He wished for his design to serve as a guide for government officials.  “If the people are well balanced in their ideal and understand,…” he stated, “the great white light of conscience must be allowed to shine and by its interior illumination make clear the path of duty.”

The upper floor and part of the dome of the Capitol Building.

The Capitol Building has not always looked the way it does today.  It has undergone three major renovations in addition to the initial two-phase building process.  The first two renovations occurred in the 1950’s and 1970’s.  Although these renovations did much to preserve the structure by replacing and updating broken down systems, many of the changes were made without regard to the original intent of the building’s architects.

Perfunctory drop ceilings were installed in order to disguise hastily run wires and other mechanical necessities of modern buildings.  These drop ceilings not only detracted from or outright obscured the building’s natural beauty, but they also created an artificial and sterile “office-like” environment which was the precise opposite intention of Tourtellotte and Hummel’s design.

Thankfully, when the building came to its third major renovation between 2007 and 2009, everyone involved was on-board to restore the building to match its original construction and architectural design, while updating and significantly expanding the space to accommodate modern technology and increased use.  Repair and preservation of the original features were also of paramount importance during this renovation.

This most recent renovation removed the drop ceilings and other features which were incongruent with the original design – or they were cleverly disguised so they would not be noticed.  Great care was taken to ensure that the majority of the work done would not be not visible as they improved safety measures, upgraded for technological advancements, and integrated accessibility features.

An interesting byproduct of this last renovation is on display in the public gallery on the fourth floor.  In order to achieve the planned expansion, a number of trees that had been planted over time by dignitaries such as Presidents Harrison, Roosevelt, and Taft would have to be cut down.  The trees were salvaged and donated to local artisans.  In exchange, they were each asked to make and donate a piece of art from the trees to be displayed at the Capitol.  The pieces, now on display, serve as a befitting remembrance of the building’s past.

This bowl was made from one of the trees that was salvaged and given to local artisans during the 2006 renovation.

The Idaho State Capitol Building is one-of-a-kind for an unexpected reason.  It is the only state capitol that is heated by geothermal sources.  Water from 3,000 feet below ground is circulated in cleverly-hidden pipes throughout the structure.  Not only has the use of geothermal energy saved countless dollars in heating costs, but it has also cut down on the probability of electrical fires.

On display in the public gallery on the fourth floor stands a statue known as Winged Victory of Simothrace.  It is a replica of an ancient Greek statue found in the Aegean Sea that was relocated to the Louvre in France.  In 1949 France sent a train known as the Merci Train (“Thank You” Train) which brought gifts to all 50 state capitals in the United States.  It was an expression of great appreciation for the relief efforts (food, clothing, medicine, fuel, etc.) that the United States provided to France following WWII.  Among the gifts delivered to Idaho’s state capital was this statue.

The public lounge located on the third floor has two flat-screened TV’s that continuously loop several well-done documentaries about the Capitol Building and the history of the State of Idaho.  Be sure to allow some extra time to view them if you are a history or architecture enthusiast.

Although you may not have thought that your visit to Boise would include a trip to visit the Capitol Building (especially if this type of venue usually isn’t precisely your cup of tea), you should make time anyway.  Its familiar-looking exterior belies the stunning interior that will have you snapping photos until there’s no space left on your phone.

“Winged Liberty” statue. It is a copy of Nike of Samothrace, a statue found on Samothrace, Greece in 1863 by a French explorer. This replica was given to the United States in 1949 by France to thank the US for liberating them during WWII.
What to Look for When Buying a Used RV How Airline Ticket Prices are Set