SAILING ABOARD THE LADY WASHINGTON AND HAWAIIAN CHIEFTAIN

The Lady Washington is Washington’s official State Ship and can be found sailing up and down the Pacific Coast from her home port of Aberdeen, WA.

If dreams of sailing on an authentic tall ship is on your bucket list and your destination includes the West Coast, then a sail aboard the Lady Washington is a “must” for your travel itinerary.

You may not have heard of her before, but without knowing it, you have seen the Lady Washington in films and TV shows.  She starred as the HMS Interceptor in Pirates of the Caribbean:  The Curse of the Black Pearl; Captain Hook’s ship, The Jolly Roger, in Once Upon a Time; and she was the brig, Enterprise, on Star Trek Generations and  just to name a few appearances.  You also may not have recognized her because each time she appears, she is modified to take on the look needed for that particular show – much like an actor’s costume.

The Lady Washington is operated by the Grays Harbor Historical Seaport Authority (GHHSA), a 501 (c)(3) not-for-profit organization whose mission it is to educate and provide experience in order to preserve maritime traditions.  Now the official State Ship of Washington, the Lady Washington was built and launched in 1989 in Aberdeen, Washington as part of the state’s centennial celebration.

The original Lady Washington was built on the East Coast of the United States in the late 1700’s, and was named for Martha Washington, the First Lady of the United States.  An impressive vessel, she was chosen to be part of the Columbia River Expedition on the far side of the North American continent.  She left her port at Boston Harbor In October of 1787 and began a voyage across the Atlantic Ocean.  She rounded Cape Horn at the southern tip of Africa, then continued across the Pacific Ocean to the western coast of North America. 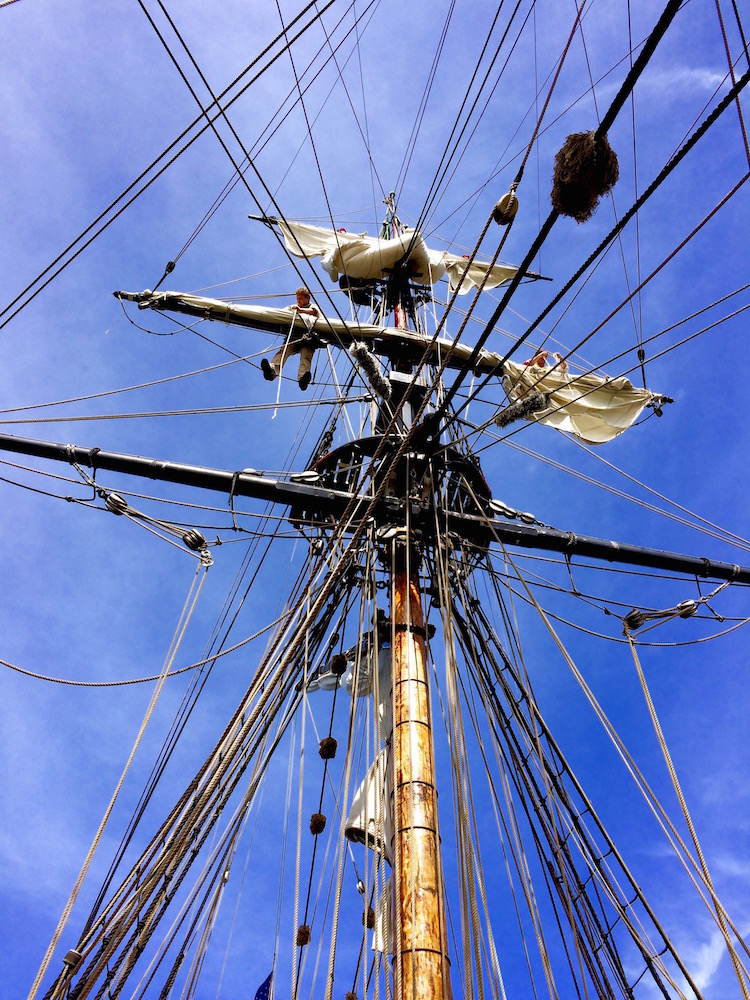 A String of “Firsts”

The Lady Washington became the first American ship to land on the West Coast of North America upon her arrival near Tillamook, Oregon.  Her mission of “firsts” was lengthy as she was also the first American vessel to round Cape Horn, as well as reach Honolulu, Japan, and Hong Kong.  She initiated the trade of sandalwood and black pearl between Hawaii and Asia and became involved in the fur, tea, and porcelain trade between North America and China.  During one of her stops in China she was fitted with a second mast, reclassifying her  as a brigantine vessel.  Sadly, the original Lady Washington sank at the mouth of the Mestizo River in the Philippines during one of these trading expeditions in 1797.

The current-day Lady Washington is a full-scale replica of the original ship including the second mast that was added later.  She is a square-rigged vessel whose overall length of 112 feet with a beam width of 22 feet.  She is outfitted with 6 miles of rigging, which are the wires and lines that support the masts and control the sails.  According to Coast Guard regulations, the new Lady Washington has been outfitted with current day navigation and safety equipment, but much of it is cleverly disguised so as not to detract from her original design. 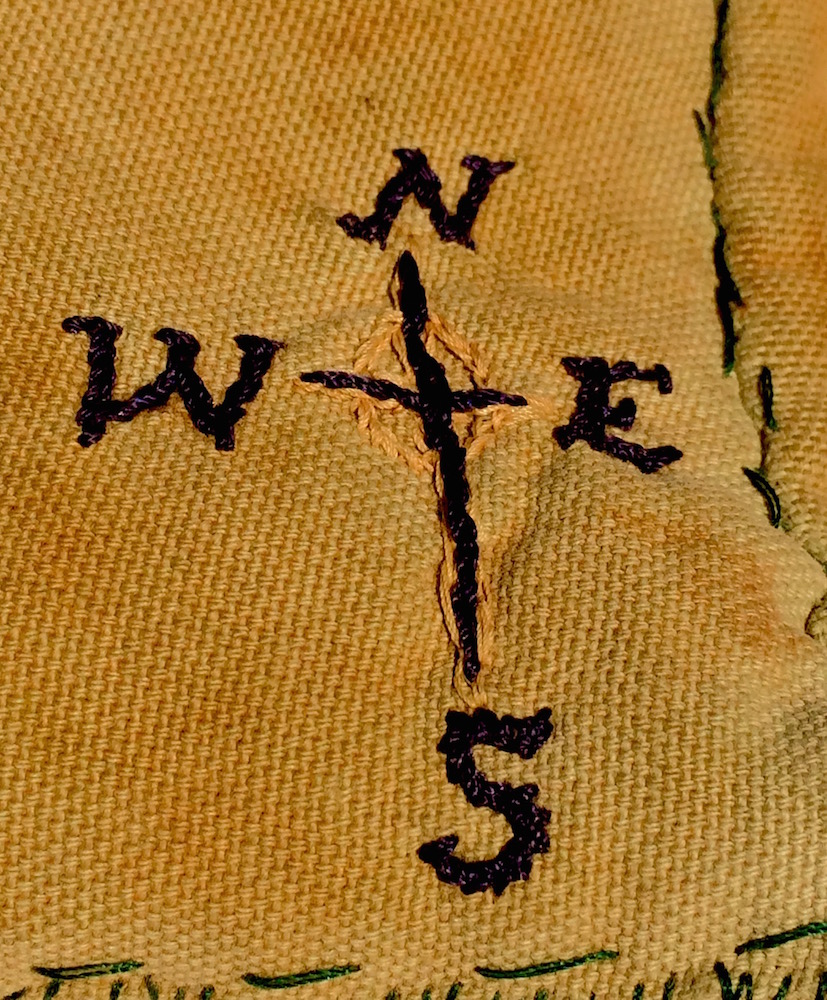 Dockside tours are available in virtually every port of call.  The public is invited to wander about the ship and ask questions of the crew.  There is no charge for these tours, but as Grays Harbor Historical Seaport Authority is a not-for-profit organization and is heavily dependent on donations, a $5 donation per person is recommended and greatly appreciated.

Sailing Aboard a Tall Ship

To really get a feel for sailing a tall ship, book a spot on one of Lady Washington’s adventure sails.  You can volunteer to help out with some of the duties aboard ship while under way and the friendly crew members will teach you how to do the tasks.  While underway you get a chance to experience booming cannons and listen to the period-costumed crew as they entertain you with sea shanties (mariners’ songs) and tall tales of the sea.

The Lady Washington is often found sailing alongside her sister ship, the Hawaiian Chieftain, which was purchased by Gray’s Harbor Historical Seaport Authority in 2005. Unlike the Lady Washington, the Hawaiian Chieftain is not an old vessel, or even a replica of an old vessel.  She was built in 1988 for trade among the Hawaiian Islands and is made of steel like many modern-day boats used in sea trade.  Her design is inspired, however, by ships used for passenger transport up and down the Atlantic Seaboard.

For a real treat, try to schedule your visit to coincide with both ships at the same port of call.  Then check their schedule for a battle sail.  Given the massive amounts of rigging that must be adjusted rapidly to change the course of a tall ship in a battle, making tight battle maneuvers requires precision and a well-trained crew.  Watching the crew work like a well-made clock to execute turns will make you wonder how they keep up with all of those lines (ropes).

Cannons are fired at the opposing ships with real black powder.  No shot is used, however, so there is no need to be worried.  Be sure to be sure to bring ear plugs as the cannons are extremely loud.

If spending a couple of hours aboard doesn’t seem like enough time and you want to get the full experience, consider booking a passage on the Lady Washington or Hawaiian Chieftainbetween ports.  Do it as a vacation trip or just do it to get from point A to point B.  Spending a few days  or more aboard one of these ships is a unique experience that will leave you with many stories to tell.  As a passenger, you can opt to become part of the crew and help with duties aboard.  If you are lucky, you may even be assigned a watch. 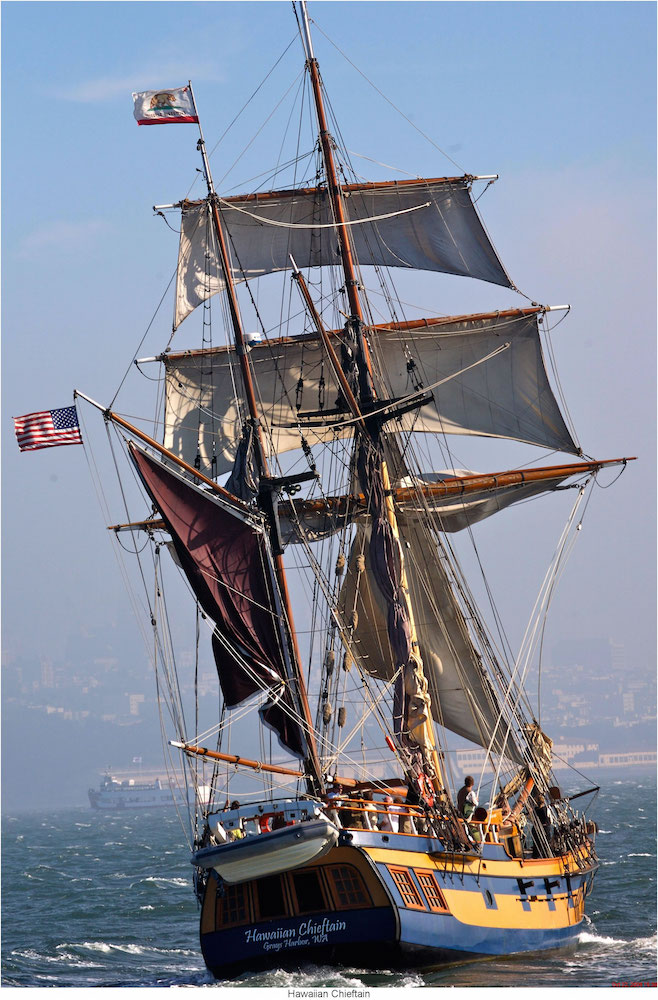 Amidst all of the fun and games of the adventure and battle sails, some serious learning takes place for school-aged children on these tall ships.  Students learn about the life of a sailor in the late 1700’s, including what they ate, the tools they used, and what daily life was like.  They also get to see how sailors navigated using very basic tools to determine speed, depth, direction, and time.  A brief history lesson replete with artifacts and maps is also part of the program in which students learn about the Pacific trade during the Age of Sail.

Should your interests go beyond the casual encounter of a single sail or brief passage, check out the Two Weeks Before the Mast program offered by GHHSA.  In this program you get authentic hands-on learning aboard a tall ship.   The program is open to anyone 18 years of age and up.

Women, don’t be bashful!  Maritime trades have been dominated historically by men, but women make up 40-60% of the participants who enroll in this program.  The GHHSA is dedicated to extending its educational programs to minorities and women, and this is readily apparent when you visit one of their ships.

In Two Weeks Before the Mast you live aboard the Lady Washington or Hawaiian Chieftainand you serve as an actual member of the ship’s crew.  As part of your training you will learn everything from maritime history, to sailing theory, to knot tying skills, navigation, and ship maintenance.  Check out this video  “A Day in the Life Aboard the Lady Washington,” for a taste of this experience.

Many people who go through the Two Weeks Before the Mast program opt to stay on as volunteers to get more hours of training.  It is not uncommon for these graduates to be hired as paid crew.  Granted, you have to work your way up from the bottom, but this is a great way to get into a maritime trade as a professional.

Both ships tend to be a bit of a moving target, but you can find their current whereabouts and the next several months of sailing schedules online.  Tracking down the Lady Washington or the Hawaiian Chieftain for an adventure or battle sail is well worth the effort.

In general, they tend to roam along the Washington Coast in summer, and then sail down to the San Diego area in winter.  In late fall and spring they are somewhere in between.  In a year, each ship will visit between 40-50 ports in Washington, Oregon, and California.  Occasionally, they might even be found as far north as British Columbia.