Don’t Camp by the River

Even the best-laid plans of mice and men don’t always work out. Sometimes you just want to camp to get a little rest and you end up nearly dead.

Most of us like to have a scenic view of water when we go camping.  If at all possible, we will try to find a nice, level site that is right on the water.  There is something about being near water that is serene, peaceful, and calms even the most frayed of nerves – unless, that is, that you happen to be in Africa. 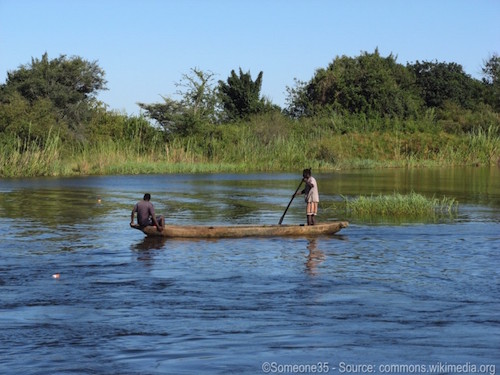 This One Time, In Nambibia

While traveling in Namibia, I met up with a couple and we went traveling together for a week or so.  We rented a car in Windhoek so that we could go and see the Namib Desert, which was the only way to get out there.  After that, we were all headed the same direction, so we traveled for a couple of more days until our paths diverged.

We had been hitchhiking back up to the northern part of Namibia, and were able to make it as far as a game lodge in the Caprivi Strip.  We arrived just before dark set in and made arrangements with the game lodge to camp in a grassy area just beside the river.  The view was breathtaking.  Across the river lay war-torn Angola, but you couldn’t tell from our vantage point.  We were in the wilderness and it was phenomenal.

Since we only planned to stay the one night, and there was still the matter of dinner to attend to, we thought it best to split up duties with one of us building a fire, one of us prepping dinner, and one of us setting up the tent.  The couple had a multiple person tent, and while I normally did not sleep in other people’s tents, we just decided it would be easier to break camp the next morning so we could start hitchhiking early.  Besides, their tent was large enough to accommodate 6-8 people.  It was ginormous.  It wasn’t like we were going to be sleeping elbow to elbow.  There was room enough for all three of us and our huge backpacks.

As we were finishing dinner, we were joined by two other couples who pitched their tents, one on either side of ours in a semi-circle with maybe 3’ of walking space in between – plenty of room if one needed to get out and walk around the tent to go to heed the call of nature in the middle of the night.  The grassy area wasn’t very large, so even though we were kind of on top of one another it was just for a few hours while we slept.  Normally, I like my space, but they had just as much right to this free camping area as did we.  So, whatever –

Shortly before falling asleep that night, the fact that Angola was a stone’s throw away became very clear to us.  We heard artillery shelling far off in the distance.  It was a sad thing to go to sleep knowing that people were surely dying and that there was nothing we could do to stop it.

Despite the sounds of war, sleep eventually found us and we were all dozing soundly – for a while at least.  For at some point in the night, I was awakened by a noise.  I am a light sleeper, and it doesn’t take much to wake me, but this was not a quiet sound.  There was some sort of animal outside, and it was very close by.

Things that Go Bump in the Night

Having spent the last several months in a tent in the African Bush, animal noises had become the norm.  I would hear all manner of things – of which I had no idea what they were.  I never have been too bothered by that as most critters are harmless and are just out doing their thing.  This, however, was a different situation.

The noise I had heard was not 20-30’ away.  It was more like 2-3’ and it was loud.  I sat bolt upright and could hear my tent mates as well as the people in the other tents on either side of us all stirring.  This was no ordinary noise; nor was this a small animal.  Whatever it was, it was quite large.

As sleep fell away and the awareness of wakefulness set in, it was clear that this creature was not alone.  He or she had brought friends – and we were right in the middle of their party.

The noises seemed to multiply.  What we were hearing were deep grunts, snorts, and loud breathing.  They sounded like they may be rutting around in the grass.  After  putting two and two together – riverbank, large snorting animals, and sounds of possible grazing (?) – we surmised that we were surrounded by hippos!

If you are unfamiliar with the fauna of Africa, let me bring you up to speed.  The most dangerous animal is the hippo.  They are aggressive and very unpredictable.  The last thing you want to do is startle one, which, naturally, is precisely what happened next.

Off in the not too far away distance near the game lodge, in the dead of night, someone fired up a motorboat.  To this day I still don’t know why this happened.  Surely, in the dark of night no one at the lodge would have been able to see over to our area to know hippos were there.  Maybe there were more up around the lodge?  That question will forever be unanswered.  Regardless of why someone decided it was time to start up their very large outboard motor at this hour, the predictable result happened.

Although hippos are unpredictable in their behavior, there is one thing that is almost certain.  When they become startled, they go straight to the water.  They don’t pass Go, and they don’t collect $200.

Had the hippos only been between us and the water, this would not have been such a big deal.  Unfortunately, as we would soon discover, there were a number of them behind our tents as well.  I suppose they may have come up from elsewhere on land and wandered in behind us at some point during the night.  That didn’t really matter, though.  What mattered was that now that they were startled, the fastest path back to the river was through our tents, but we didn’t know that just quite yet.

I had been sleeping on one of the far sides of the tent, so I was somewhat close to the wall – probably a couple of feet away.

It all kind-of happened at once – the motor, the sounds of distressed snorts and grunts, the shuffling of the large beasts, the stamping of large feet, and the side of the tent suddenly bowing inward by several feet, brushing my face and then springing back.  Holy shit!  They were headed back BETWEEN the tents – the ones that had barely 3’ between them – and we were in the middle tent.

The couple and I, jumped up out of our beds in the dark (we hadn’t turned on any lights for fear of startling the hippos), and we stood upright in the dead center of the tent, grabbing onto each other trying to compress ourselves into as little space as we could.  What had happened on my side of the tent was happening on the other, one of them had told me in the chaos.

For the next few minutes we stood there as still as statues as the whooshing of the fabric and snapping of the tent poles repeated itself every few seconds.  The phrase “one-hippopotamus, two-hippopotamus, three-hippopotamus” took on an entirely different meaning to me as I mentally tried to count how many of them were coming through.

To ensure that ALL of them came back into the water, the motorboat that had started this whole ruckus had begun going up and down the river past our area, then back up to the game lodge.  I began to wonder if this was the way that they got the freeloading hippy backpackers to pay for a room.

Eventually, there was quiet.  No more hippos.  No more motorboat.  I had long since stopped paying attention to the motorboat specifically, and I wondered if it had made it back to the lodge or if the hippos had gotten it.  Zooming around in a motorboat in the dark amid a river full of startled hippos really isn’t the brightest of ideas, no matter what people may tell you otherwise.

We called out to the people in the other tents who verified that they were also ok following the episode and all of the tents were apparently still standing, so we did our best to salvage what was left of the night by pretending to sleep.

When the sun rose, the whole camp was more than ready for their coffee and an inspection of the inevitable damage from the previous night’s experience.  Aside from a bit of mud that streaked the sides of the tents and a couple of places where rain flys had been dislodged, there was no actual damage.  No tent poles were broken or even bent out of shape.  They had just sprung right back into shape after each hippo had passed.

We were fortunate.  We could have all been dead. We had learned our lesson about camping near the river in Africa.

We had our coffee and began breaking camp.  Although we were drinking some cheap instant coffee with even cheaper non-dairy creamer, it was one of the best cups of coffee I have ever had.