While I was backpacking through Africa, the vast majority of my nights were spent in tents.  Most places I camped cost next to nothing, and since I was on a very tight budget this worked well for me.  With the exception of my visit to the municipal campground at Victoria Falls in Zimbabwe, I was never really bothered by the idea of anyone getting in my tent at night.  For the most part, when I unzipped the tent and got in for the night, I was the tent’s only inhabitant, save for a few annoying mosquitoes that might have blown in as I was entering.

One very, very early morning, well before dark, somewhere near the Okavango Delta in Botswana (a phenomenal place that you must visit, should you ever get the opportunity), my alarm clock sounded.  I had set it for this ungodly hour on purpose because it was my intention to hitch a ride back towards Zimbabwe that day.  Locals had told me the best time to get a ride would be very early in the morning and to be along the side of the road by sun-up. 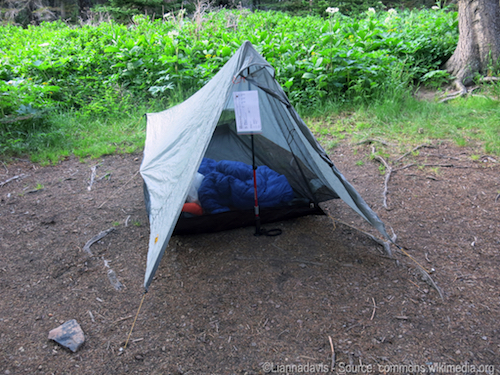 I went through my morning routine of changing clothes into the least filthy something or the other that I had, brushed my teeth with a single sip of clean water (something that is often at a premium when traveling this way), and packing my stuff into my backpack.  Going through the motion of these chores was particularly fun in the dark, because this happened before headlamps became popular.  I’m sure they existed, but I didn’t have one.  To keep my hands free, I held my flashlight in my mouth.

One of the last things that gets packed, save for the tent itself, is your sleeping bag and foam mat.  Once I had pretty much everything else packed in its rightful place, flashlight in mouth, I ducked into the tent and grabbed my sleeping bag with both hands and yanked it toward me.  As it pulled away from its resting place the previous night, and as I refocused my attention to the pile of sleeping bag now at my knees, I thought I caught a glimpse of something that moved up near the head of my sleeping mat.

I raised my head in order to redirect the flashlight in my mouth to see what it was, but it appeared to be nothing.  Finding nothing amiss, I continued by stuffing my sleeping bag into its stuff-sack and then strapping it to my pack which resided outside the tent.  I knelt back at the tent entrance and began to roll up my sleeping mat.  As its length became shorter, I realized out of my peripheral vision that something was, indeed, moving around in my tent.

I raised my head again, redirecting the flashlight to the head of the tent and saw what looked like my sunglasses, maybe.  It was hard to see because the batteries in my flashlight were almost dead.  I wondered how my sunglasses had gotten there.  I rationalized that they must have fallen out of my pack when I had retrieved something else the previous night.  No matter – I’d just grab them in a second.

Still half asleep, I finished rolling my mat and lashed it to my pack, then crawled back into the tent one final time to retrieve what I believed (quite mistakenly) to be my sunglasses, for what I saw was about that size.  As I reached out to grab the dark object in the dim light, it skittered sideways quite rapidly.  Last I checked, my sunglasses did not have a tendency to do that of their own accord, and the last acid I had taken in my life was in jr. high school.

Now fully awake and realizing that my sunglasses had not suddenly sprung to life as if they were in a Disney film (because, clearly, if that would have happened, I would have been on acid), I backed very quickly out of the tent.  Somehow whatever critter this was needed to be removed from my tent before I could  get it  packed away.  By the way it had moved, I was sure it wasn’t a rodent – it was far too flat to be a mouse.  I had a sneaking suspicion that I knew what it was, but didn’t exactly want to try to catch it to find out.

After pondering for a moment, I realized that whatever it was could most likely be safely removed by disassembling the tent and shaking it out on the ground.  First, though, I procured my backup flashlight with better batteries.  Off came the rain fly and then I removed the poles.  I carefully grabbed the tabs on the side of the tent and, with the better flashlight in my mouth, raised the tent in the air and began gently shaking it in the direction of the door.

At first, nothing came out, so I tried again for a bit.  Suddenly, something slid out onto the dirt at my feet.  As I had suspected once I realized it wasn’t a pair of sunglasses, it was a 5-6” long dark scorpion – brown, maybe black.  It was hard to tell, and I wasn’t going to lean down and investigate.  It seemed a bit pissed off, so I carefully grabbed my tent and moved elsewhere to finish packing.

Standing by the road a few minutes later as the sun began to rise, I wondered just how close I came the previous night to having been stung – possibly in the face – by my uninvited guest.

Don’t Camp by the River Have Loo Roll, Will Travel