When I visited Mexico in the early 2000’s, I actually had a companion with me.  This is an unusual thing since I normally travel solo.  But, I had met a guy who traveled like I did – lengthy trips, solo, and on the cheap.  We had just begun casually dating when somehow we got a wild hair and decided to go to Mexico together.  Both of us had traveled the world and were very seasoned travelers.  The last thing we expected to encounter was a case of Montezuma’s Revenge.  For seasoned travelers, you just know to avoid certain things – like unwashed/unpeeled fruits and veggies, water that is not bottled, and so forth.  Piece of cake if you are used to it.

We flew into Guadalajara in the western part of Mexico and had about two weeks to make it across the entire country to make our flight out that left from Cancún.  We had a lot of cool places that we planned to see and were super excited about the trip.  We had planned to take busses to get from one city to the next, but as soon as we went to get our bus tickets to our first destination, we quickly realized that something was amiss.  Every seat on all of the busses were taken.  Say what?  Since when was every seat on every bus full?  Neither of us had ever experienced that while traveling.  It was always possible to get a ticket – even if the hours weren’t ideal.

Don’t Travel to Mexico During Easter

We finally figured out the problem.  We had decided to travel to Mexico the week before Easter.  If you have never been to Mexico, pretty much the entire country is Catholic, and the week preceding Easter is a BIG DEAL.  There are all kinds of street fairs and parties and you name it going on.  Quite literally the whole country is underway during this time to visit family and friends – and there are no seats to be had.

While we did finally make it to our destination in Cancún, our trip was nothing like we had planned.  We often got stuck in places for long periods of time before being able to locate transportation a little further along our path.  Our path was not determined by what we wanted to see, but rather, by the places to which we were able to get tickets in the direction of Cancún.

By the time we had made it to Merida on the Yucatan Peninsula – within striking distance of our destination, we decided to treat ourselves to a meal out at a restaurant.  Since we were traveling on a shoestring, eating out was an indulgence, but what could it hurt?  We were on time and under budget, so we opted to splurge at a nice restaurant.  This was quite the extravagant meal since most of what we ate was either unheated stuff we could find at the supermarket or from the numerous taco street vendors.

We ordered two very nice dinners and opted to try the fruit punch that seemed to be the most popular drink in the restaurant.  Everyone there had a glass of it at their table.  We ate and drank with gusto and then returned to our less fancy hotel room for the evening. 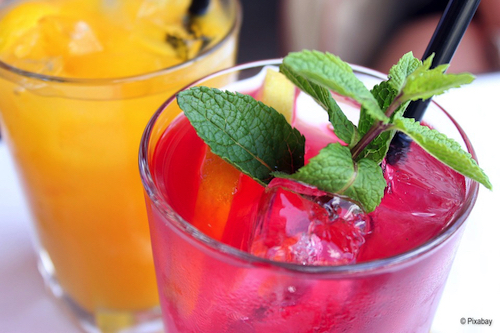 Then, Things Went All Kinds of Wrong

At some point in the night, one of us woke up with a tummy ache and headed to the bathroom.  I can’t remember which one of us it was who went there first since everything for the next 24 hours happened in a state of agony and delirium.

Shortly after the first bathroom trip, whichever one of us wasn’t the first had to go – and it didn’t stop at that.  We tag-teamed for the bathroom – often threatening each other with their lives if they didn’t vacate the premises immediately since what we had put down us was coming back – and with a vengeance – in both directions.

You know how it is when you have been dating someone for a while and one of the two of you slips the first fart?  Yeah, we hadn’t been dating that long yet and here we were on opposite sides of paper thin walls offering up our gastrointestinal contents to God and everybody in a manner that resembled deafening thunder.  If the sound effects weren’t bad enough, then there was the smell that added insult to injury.

Being nearly at the end of our trip, we were running quite low on food – not that either of us could eat anything while the worst of it was taking place – but it would have been nice to have had some crackers and ginger ale.  Nope.  Nothing.  And we were completely out of potable water.

Oh, and speaking of potable water, we figured out what must have caused our condition – the ice cubes in the fruit punch.  Both of us had totally separate food, me being a vegetarian.  We felt rather foolish.  We knew better.  Hell, we could both have given lectures to newbie travelers on that very subject in our sleep, under heavy anesthesia, gagged, and with our hands tied behind our backs.

As if that didn’t make us feel foolish enough, neither of us had rehydration salts (a MUST when you are traveling), nor did either of us have any antibiotics (also a must).  It was a perfect storm.

Finally, on the second day of this horrid event, I, being in sightly better shape than my travel companion, left the room in search of a pharmacy for rehydration salts and antibiotics, fruit juice and water.  It was a hot day and being on the verge of tossing my cookies and completely dehydrated did not make this a fun chore.

Somehow at the pharmacy I was able to write down the word ciprofloxacin which the pharmacist recognized because my attempt to ask for this antibiotic in broken Spanish was just laughable.  I procured a couple of bottles of fluids which weighed the equivalent of two African elephants in my weakened state, and hauled them back to the room.  I don’t think I woke up for another 24 hours after that, but we eventually got on a bus and made it to Cancún and caught our flight home.

This story is made much funnier, because it is the second time I’ve caught the crud and didn’t have antibiotics with me.  You’d think I would have learned the first time – especially since that story was even worse.

To add insult to injury, everyone and their pet goldfish has heard of Montezuma’s Revenge and how it is acquired.  I guess we all goof up from time to time.