My Trip to Antarctica

In 2004 I took a trip to Antarctica.  I had always wanted to go, having dreamed about it since childhood.  When I got the chance, I jumped on it in a heartbeat.

I flew down to Ushuaia at the tip of South America and boarded a boat called the Akademik Shokalskiy bound for the Antarctic Peninsula.

Getting there meant we crossed the dreaded Drake Passage, a notoriously stormy area where the Atlantic, Pacific, and Antarctic Oceans all converge.

During our 2 day trip through the Drake Passage, we (the ones who weren’t suffering from sea sickness) attended free lectures on everything from the birds, to whales, to seals we would be seeing to the strict laws governing visits to the Antarctic continent (take nothing, leave nothing), to lectures on ice.  Yes, there is a lot to know about ice, and it’s rather interesting.

Pack ice is a condition caused by super chilled water – in the case in the picture above, it happens to be in sea water.  You can find such unusual formations in the Arctic and Antarctic.  This photo was taken when I visited Antarctica in 2004 on a trip with Quark Expeditions.

Pack ice is rated on a scale of 10 points based on its thickness and connectedness. Basically, small pancake like structures of ice begin to form on the surface and as they have water sloshed over them, more ice forms – much like layers of candle wax do when you repeatedly stick your finger in it.

Eventually these small pancakes of ice become many inches, and even feet thick and begin to join together forming massive solid-like blockades.  Even during the Antarctic summer when I visited, this is very much a threat.

Pack ice is not attached to the shore and drifts about freely, blown by the wind and moved by the ocean currents.  Sometimes it blows into a channel and can block it up.  This is particularly bad when the seas do not otherwise seem to be producing ice and you head into a bay with only one way out.  On our trip, we saw pancake ice, which looks a lot like phyllo pastry, very frequently.  However, once we ran into a really bad mess of pack ice. 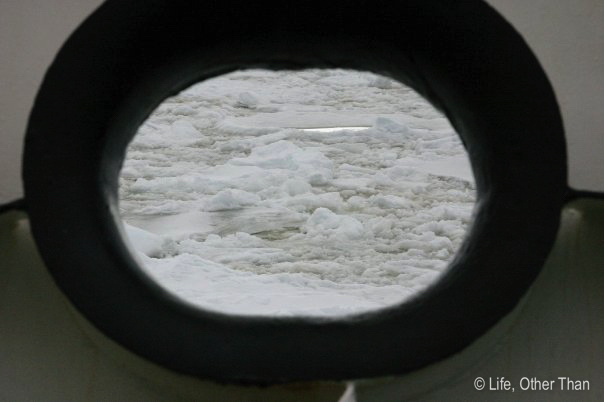 The picture here is of that pack ice as seen through a port-hole.  I found that by going to a lower deck and getting closer to the ice, you really got a feel for how abusive it was to the ship to pass through. It was extremely loud and sounded like people were scraping it and banging on the hull with hammers.  When you hear it all around you, you say a silent prayer (regardless of whether or not you are religious) that the boat builders were really on their game when they built your boat.

Normally, we were free to roam about the ship and go up to the bridge so long as we stayed out of the way.  When this happened, everyone was sent out since the crew really had to be careful and focus on getting us out safely.  Our vessel was not capable of ice-breaking and should we have gotten stuck, which is very possible, we could have been crushed long before nearby vessels could have reached us.

Another boat did get trapped during our voyage, but they were fortunate that an icebreaking ship was nearby.  It was apparently full of students, from what I was told.  They got the people off of the trapped boat safely.  I’m not sure what happened to the boat that became stuck.